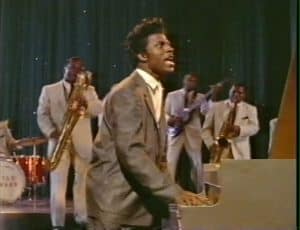 Talk about hair! Even Guci Image might not have been able to keep up with the updos, coifs, and wigs Little Richard sported over the years. Undoubtedly a rock icon, the “architect of rock and roll” as he often called himself, the man born Richard Wayne Penniman in Macon, Georgia, in 1932, died this week. But beyond his “Tutti Frutti,” “Long Tall Sally,” and all those “Wee who’s!” Richard played his flamboyancy and style to high camp with the clothes her wore and the hair he sported.

Surely a hair replacement salon does not usually work with such wild displays as Mr. Richard sported in his day. Our service is more metered and considered. But we are surely interested in uniqueness of style, color, and cut and like everyone else, appreciate not only Little Richard’s joie de vivre, but all that he influenced. One wonders where an Elton John, a Jimi Hendrix (who actually played in Little Richard’s band before he made it big with his own “experience”) the Bruno Mars and the Lady Gaga’s of the world would be without Mr. Penniman’s music and look.

Finding your style, cut, overall look with the hair you wear can be a trial and error process. Covering a balding or thinning head, and doing so as undetectable as possible is the Guci Image customer’s initial concern. We add in the possibilities in hair replacement, the uniqueness of our well-vetted systems, and extensions that come to work for you in the long run. And in this day and age, we presently have a wide range of scientifically proven, healthy, and excellently rendered options for your choosing.

Yes, it is a balance beam maintaining your individuality, your style while wearing a hair replacement system. But together, Guci Image and you can boast many a “Wee Who!” moment.